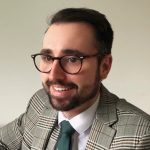 Chris joined Bermans Manchester office in September 2020 and is a Trainee Solicitor in the Insolvency Team, having previously studied Law at the University of Liverpool.

Chris has experience with assisting in contentious and non-contentious matters, acting for individuals, companies and IP’s.

The matters that Chris has experience with include, but are not limited to, the following:

He lives in Cheshire and plays 7-a-side football and likes to spend time with his friends and family.