Guy Pattison (pictured below), joined Bermans in December 2006 and became a Partner in our Property team in 2017. We spoke to him to learn more about him and his work. 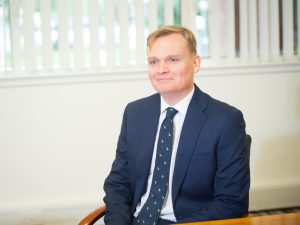 I trained with a small firm in Liverpool which focused on transactional property work and property litigation. I joined Bermans upon qualification and the rest is history!

I have particularly enjoyed acting for new businesses/brands from their infancy. It has given me pleasure to work for several clients in connection with their first outlet, and then to see them opening more venues and developing their brand.

Sports & Teams Supported: I regularly go to watch Tranmere FC and Marine FC and try to get to watch England play cricket at least once a year.

Films (Top 3): The Sting (I like a good heist!), Spy Game and Warriors. Spy Game is probably my favourite of the three

Music (3 tracks to take on Desert Island): I am going to cheat slightly and pick three albums instead. My first would be (What’s the Story) Morning Glory? by Oasis. Oasis was the first band I was really into and reminds me of being a teenager! My second album would be The Smiths by The Smiths. As well as the music being really good, I absolutely love Morrissey’s lyrics. My third pick would be Wish You Were Here by Pink Floyd. Assuming that the desert island has a good climate, I would love to spend the afternoon lying in the sun and listening to this album. At the moment, I really enjoying listening to Editors, Gerry Cinnamon and Liam Gallagher

Holiday destination: Unusually, I don’t think I have ever gone to the same place for a second time. If I had to pick the best place I have been on a holiday, it would be Bali. It is so different from anywhere else I have been to – I absolutely loved my holiday there.

Favourite book: 1984 – I really enjoy books/films which provide dystopian alternative realities and 1984 is the best one in my opinion !!

3 people for a dinner party and why?

Obvious one first – Nelson Mandela – he was such an inspirational person and I would be fascinated to hear the thoughts of someone who sacrificed such a large part of his life for a cause he believed in.

Second person would be Chris Eubank. I got quite into boxing when he was one of the best British boxers and used to love watching his fights. I have read his autobiography and he has some very interesting views on life – I think he would be really entertaining

Third person would be Ray Parlour. He was a great footballer who achieved a lot in the game. But I would also love to hear all the behind-the-scenes stories from a time when the players used to live more colourful lives away from the pitch.

To get in touch with Guy