Mike Smeaton (pictured below), joined Bermans as a trainee solicitor in 2008 and is now is a Senior Associate in our Litigation and Dispute Resolution team in the firm’s Liverpool office. 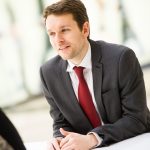 1. Can you give us a brief summary of your career so far?

Bermans ‘man and boy’! I joined Bermans in 2008 as a trainee after completing law school and qualified in 2010. I’ve been part of the litigation team since then. It’s 12 years in September which according to my research is the ‘silk’ or ‘linen’ anniversary, if anyone is thinking of gifts.

2. What area of the law do you specialise in and why?

I specialise in commercial litigation. That covers quite a wide range of work but I act in a lot of shareholder and partnership disputes, property litigation, warranty and covenant claims and professional negligence actions, amongst other things.

I enjoy the variation in the work – no two matters are the same – and the challenge of finding resolutions to disputes which are often very complicated. And I like a good argument!

3. Is there a case or a particular piece of work you were proud to be involved with, if so why?

There are a couple of cases which stand out as having been particularly high-value and complex, which at the time sometimes felt all-consuming but which were great learning experiences and satisfying to conclude.

4. Away from the law what are your interests and passions?

I have two young children so most of my time away from work is family time, days out, walks and that sort of thing – making the most of it before they get much older and I become a taxi! Other than that I enjoy cooking, cycling, playing golf when time permits, and have recently started training for my first triathlon.

Films (Top 3): Too many to choose from really but you can’t go wrong with One Flew Over the Cuckoo’s Nest, Robocop and The Thing

Music (3 tracks to take on Desert Island): First would be Whatever People Say I am, That’s What I’m Not by Arctic Monkeys, which was basically the soundtrack to my time at university so brings back a lot of great memories. Second is Brothers in Arms by Dire Straits and third would be Back in Black by AC/DC which are both albums I could listen to all day.

Boxsets: I don’t watch loads of TV but I really enjoyed Broadchurch, particularly the first series. I also really liked The People vs O.J. Simpson. Not many people have seen it but Garth Marenghi’s Darkplace is one of my all-time favourite shows.

Podcasts you listen to/recommend: ‘Golazzo’ is good – it’s basically Gazetta Football Italia from the 90’s in a podcast. I listen to a couple of NFL-related podcasts too.

Meal: Pizza. I’d eat it every day if I didn’t think it’d kill me.

Holiday destination: My favourite place I’ve been to is probably New York.

In terms of somewhere I’d like to go but never have, it’s not necessarily a ‘holiday’ but I would love to visit Chernobyl and Pripyat – I’m really fascinated by what happened there and think it would be really interesting to visit the area. I believe visitors are allowed into the exclusion zone around the site as part of guided tours but I’d quite like to explore it on my own – I think that’s currently illegal though unless you have a special permit.

Favourite book: The Lord of the Rings. I read it for the first time when I was about 11 and have re-read it several times since then.

3 people for a dinner party and why?

First is Stephen King – I love his works and think that someone who has come up with so many ideas for great stories so consistently over such a long period of time would have to be interesting company.

Next would be Ricky Hatton. He’s a sporting hero of mine and has lived a pretty interesting life outside of the ring too, so I think he’d be good company. He also famously likes a drink so I’m sure would be a good laugh.

Last spot would be for Steve Coogan who I think is hilarious so that would hopefully ensure a fun atmosphere!

To get in touch with Mike